In short, hydropower is the energy obtained from moving water. Hydropower was one of the first sources of energy to be used to generate electricity. Its principle is based on the water cycle, which consists of three steps: Solar energy heats water on the surface of rivers, lakes and oceans, causing the water to evaporate. The water vapor condenses and falls as precipitation, which collects in streams and rivers and the cycle repeats. The amount of precipitation that accumulates in an area, in rivers and other streams, determines the amount of water available that can be used for hydropower. This form of energy production is therefore susceptible to seasonal fluctuations in precipitation or long-term changes in the amount of precipitation. The amount of energy depends on the volume flow and the gradient. In general, the greater the water flow and the drop height, the more electricity a hydropower plant can produce. In hydropower plants, the water flows through a pipe or a pressure pipe socket, which presses against a turbine and thus sets the blades in motion, which in turn drives a generator. Pumped storage power plants can store excess energy in the network: The energy is used to pump the water from a water source to a higher storage basin. If the electrical energy is needed, the water can flow down the slope to the power plant or the turbine. 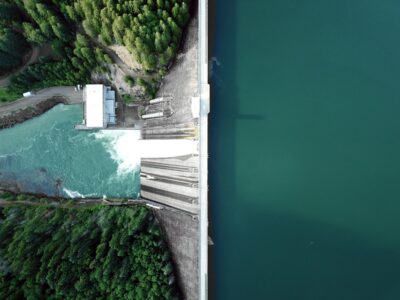